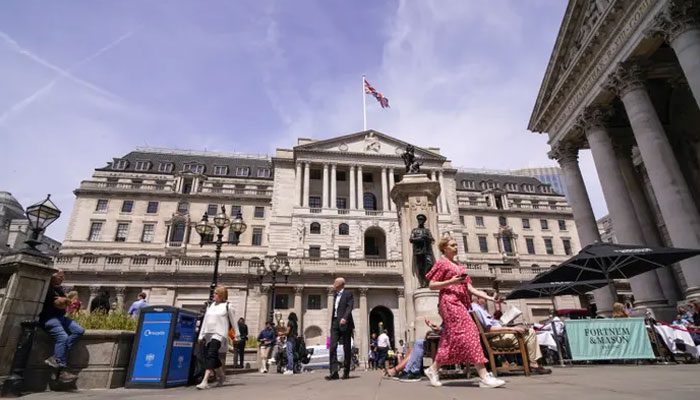 The invasion of Ukraine by Vladimir Putin has put Britain on a path to a longer-than-expected recession and inflation exceeding 13%, the Bank of England said as it increased interest rates for the sixth time in a row. Threadneedle Street claimed that it had no choice but to raise cost of borrowing by 0.5 percentage points to 1.75% and blamed Russia for cost-of-living stresses that haven’t been seen in more than 40 years and a living standard decline of 5% that will span this year and next, the largest since records have been kept in the 1960s.

The governor of the Bank, Andrew Bailey, declared that there was a financial impact from the conflict and warned that the economy was headed for a time of stagflation, which is a period of both a recession and a rise in the cost of living.

Although it is acknowledged that the highest hike in interest rates in 27 years will hurt certain people more than others, especially the poorer members of society, Bailey argued that the bank must act to stop cascading price increases from becoming rooted. The implications will be severe and demand higher hikes in interest rates, he said, if they don’t take action to stop persistent inflation sooner. There are no ifs or buts: restoring inflation to its 2% target is their top priority.

The Bank’s nine-person monetary policy committee (MPC) hinted that additional interest rate rises were anticipated and stated that it would be especially sensitive to indicators of more sustained rising prices and would, if required, act strongly in response. The MPC predicts that raising the energy price ceiling to roughly £3,500 in October will cause inflation to soar to 13.3%, its highest level since 1980, and will start a five-quarter recession that will extend from the last quarter of this year until the end of 2023.

The next prime minister will face pressure to assist consumers in coping with growing costs because the average mortgage payment is anticipated to increase by roughly £50 per month as a consequence of elevated interest rates and the average family fuel bill has reached £300 per month.

The bitterly contested battle to succeed Boris Johnson saw both contenders claim that their economic strategies were justified by the bank’s bleak predictions, which were released while he was away on vacation. Rishi Sunak suggested that Liz Truss’s plans would lead to increased borrowing, higher interest rates, and longer-lasting inflation, while Truss claimed the possibility of a recession highlighted the necessity for her “bold economic plan” to undertake rapid tax cuts.

The Bank stated in its most recent update on the status of the economy that it anticipated the impending recession to last as long but to a lesser extent than the one that occurred during the global financial crisis of 2008–2009. Even so, the MPC anticipates a strong increase in unemployment from under 4% to over 6% by early 2025.

It is projected that inflation will remain above 10% through the next spring before dropping dramatically to below its target of 2% by the middle of 2024. To reduce inflation, central banks all around the world have raised borrowing costs. The US Federal Reserve quickly increased rates to a range of 2.25% to 2.5%, and the European Central Bank just increased its primary interest rate by 0.5 percentage points.

While the majority of economists support such initiatives to reduce inflation, there are growing demands for moderation as economies enter recession and unemployment rates rise, reducing corporate and consumer expenditure without the need for additional interest rate increases.

Martin Beck, the chief economist for the EY Item Club, stated that there is little evidence of the widespread salary increases that the central bank fears will prevent inflation from rising, and that this belief is based on shaky ground. Former MPC member and economist Danny Blanchflower claimed that the Bank had underestimated the fragility of the British economy, which was headed for a severe recession and required lower rather than higher interest rates.

After a growing number of low-income households turned to high-interest borrowing to stay afloat, debt relief organisations lobbied the government to provide further subsidies for them. Stepchange stated that the pressure on people attempting to keep up with their expenses and avoid a bad debt situation will increase as a result of the rise in borrowing costs, which raise mortgage and rent costs.

The government has lost control of the economy, with rising inflation certain to remain, while mortgage and borrowing rates keep increasing, according to Rachel Reeves, the shadow chancellor. As the cost-of-living problem grew worse, Labour charged Johnson and his chancellor, Nadhim Zahawi, with being absent in action. Zahawi was also out of Westminster when the rate increase was announced because he was travelling with his family while they were on vacation, despite the chancellor’s insistence that he wasn’t.

In other words, there is no such thing as a holiday and not working, he declared in a statement. Both in the public and private sectors, he has never experienced that. He asserted that any entrepreneur will tell you that if you ask them. According to Treasury officials, Zahawi and Bailey spoke on the phone about the economic effects of Russia’s invasion of Ukraine on the world energy market, which they both believed was the main driver of inflation.

Silvana Tenreyro was the lone MPC member to vote in favour of a lesser 0.25% hike after eight other members supported the 0.5% increase. The MPC stated that since the Bank’s last review in May, inflationary pressures in the UK and the rest of Europe have increased significantly. According to the MPC, this is partly because wholesale gas prices have nearly doubled since May as a result of Russia’s restriction on gas supply to Europe and the possibility of more restrictions.

Based on the report, global supply chain constraints would account for the majority of the other half of October’s 13.3% annual inflation rate, which would be caused by rising energy costs. The MPC signalled that it would tighten policy in addition to hiking interest rates, accelerating the QE-related process of money creation.

The bank purchased £895 billion in corporate and government bonds between 2009 and the beginning of the pandemic in 2020 in an effort to stimulate the economy. However, the bank now intends to liquidate bonds at a rate of £10 billion every quarter over the next year.