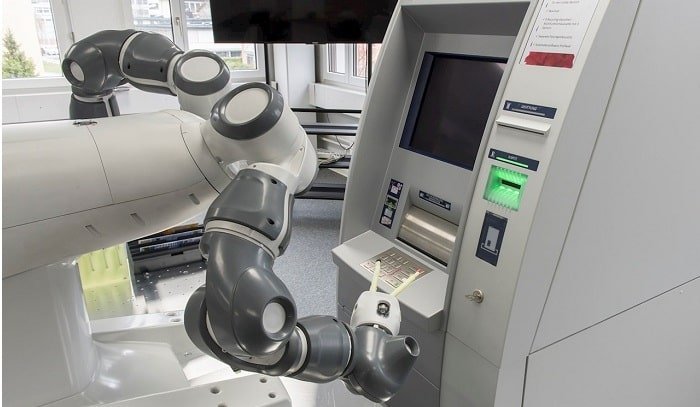 YuMi, the groundbreaking ABB industrial robot that has the precision to handle the most complex tasks with pinpoint accuracy and the flexibility to work safely alongside humans in the factory of the future is adding a new job title to its portfolio: ATM tester.

To ensure safe and secure financial transactions by staying abreast of the latest developments in security, ATMs typically receive software updates every six months. However, before any new code is released it must undergo thorough and repetitive testing to ensure that it complies with strict global and local specifications for reliability, usability and security. This testing has traditionally been performed manually, requiring individuals to spend hundreds of hours in front of ATMs, with ample risk of human error. 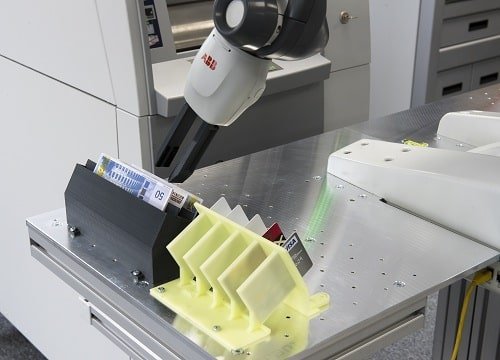 Now, with YuMi® on the job, the speed and reliability of ATM software testing has increased dramatically. Swiss-based payments software provider Abrantix AG commissioned an ABB YuMi robot to automate the testing of Diebold Nixdorf’s ATMs. The Abrantix test-environment software instructs the YuMi robot to test common ATM operations such as inserting cards, punching in PIN codes and withdrawing and inserting money, just like a human.

The prototype dual-armed YuMi for ATM software testing, developed at the Abrantix global headquarters in Zurich, Switzerland, is a game-changer for ATM software testers. The ATM testing it performs is so exhaustive that the YuMi is programmed to deliberately make human-like errors, such as inserting money bound with a paperclip, to ensure the software can deal with a range of issues.

“Previously, the test cycles could become bottlenecks and even risks in the critical path of a release. With the new YuMi-based solution, this is much more under control and employees can now focus on improving test cases and procedures or even develop new software features, while YuMi is testing the ATMs,” said Abrantix CEO Daniel Eckstein.

During the day, developers create new ATM software features that are then tested automatically by the YuMi robot overnight. Feedback is checked the following day, which frees up time for testers to perform more meaningful tasks.

Marc-Andre Zingg, ABB Robotics Business Line Manager in Switzerland, said: “The ATM testing system developed by Abrantix is exactly the sort of precise, collaborative process that our YuMi robot was designed for. With YuMi®, Abrantix is not only assured that the robot will safely share tasks with their employees, but their skilled software developers now have more time to devote to other more valuable tasks, while YuMi works away in the background on repetitive, but highly important tests, 24 hours a day.”

The game-changing ATM testing conducted by YuMi is just the latest demonstration of the broad capabilities of ABB’s family of collaborative robots. YuMi was originally designed for small-parts assembly operations. It’s called a collaborative robot – “cobot” for short – because it allows manufacturers to design flexible production processes that are oriented to today’s markets. YuMi®’s tireless ability to tackle precise, repetitive operations – what are often called the “three D’s,” for tasks that are dirty, dull and dangerous – frees human workers to focus on more meaningful, specialized and intelligent tasks.

Outside of the factory, YuMi has proven its versatility by solving Rubik’s Cube and making sushi. It has even conducted a symphony orchestra during a 2017 live performance in Pisa, Italy with the acclaimed tenor Andrea Bocelli.